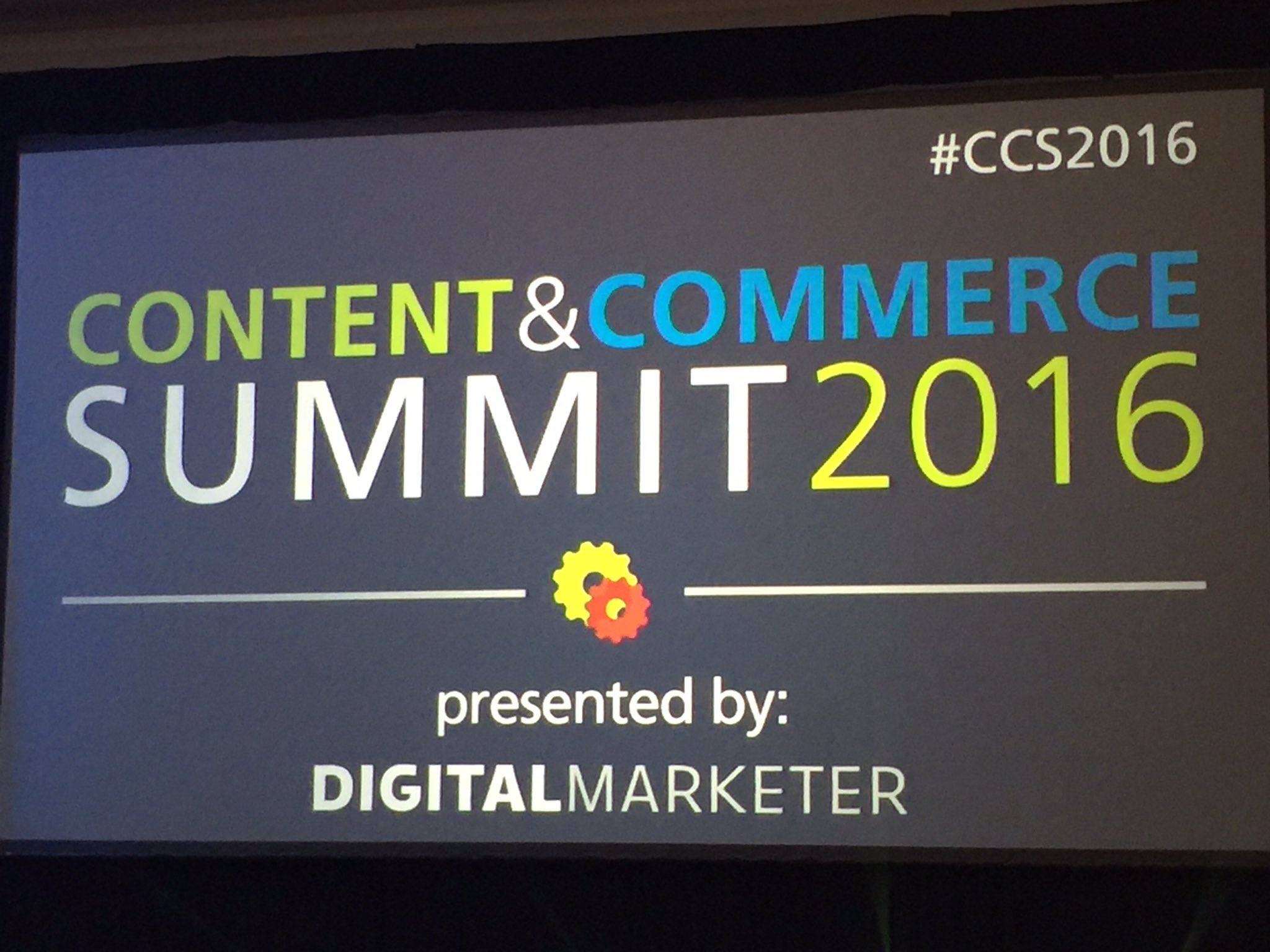 Time for another event review.

I also purchased my own Snapchat geofilter to this one (photos at the end).

This time I attended the brand new Content and Commerce Summit 2016 in Orlando Florida which is also hosted by the Digital Marketer crew. This event was more focused on eCommerce and content marketing which is a great change of pace from the hard core traffic and conversion strategies we’re all used to.

So before I dive deeper into the event, here’s an overview about how the event was laid out.

Content and Commerce Summit 2016 was an event I was looking forward to for some time which is why I committed early on, to fly from Melbourne Australia all the way across the world to Orlando.

In this instance, I didn’t purchase the VIP upgrade, however I did purchase the upgrade for next year’s Traffic and Conversion 2017.

I knew this was the first time the event was being run so I was interested to see how it compared to T&C earlier in the year, and to my surprise the branding behind it was really on point.

The moment I first walked towards the entrance, I noticed banners hung all around the booths and poles wrapped with branding too.

The crowd was quite a different one to the Traffic and Conversion event. When I walked into the room at C&C it was quite dominated by physical product eCom stores unlike T&C Summit which was mainly agencies etc.

In terms of business level and marketing acumen, there were people at really completely different ends of the scale at content and commerce summit. Some people hadn’t made their first $10,000 yet online meanwhile others were running $10m+ a year businesses and were looking to scale up.

So when it came to networking, I met some really great people who I wouldn’t have otherwise had a chance to connect with if it wasn’t for the event.

Pro Tip: One note I’d share with everyone is if you really want to get a lot of out events like this, focus on the networking. I spent about 70% of my time in the booths speaking with business owners whom I could potentially do business with or partner with along the line. While the sessions were great (more on that in a moment) it’s the people I met which is why I flew around the world to attend.

The content for Content and Commerce Summit delivered by Digital Marketer’s team was primarily focused around their company Native Commerce which is a holding company to many brands and eCommerce stores where they trade in different niches.

I’m a massive fan of their business model and the insights they deliver when they build each of their presentations so I always got nuggets from all of their sessions.

A few of my favorite sessions that they had on offer which I got some great takeaways from were:

There was some crossover (naturally) from the content at T&C ’16 however there was also a lot of new nuggets which were good. I mean, if you’re someone who follows the digital marketing space during the course of the year, you’ll see a lot of the same strategies come up. However, even someone like myself who knows their model quite well learnt some new strategies which Ryan, Perry and Roland shared with the audience across the three days which I could go and apply into my businesses.

As for the other speakers at the event, I honestly only sat in on two sessions.

One was Ezra’s session which is below which I loved (I always learn something awesome from him) and the other one I can’t remember but was extremely bored and left halfway through it… (probably why I don’t remember it!).

Now, the question always comes up, “Should I buy the recordings for the event? Or is this just another upsell?”.

This is how I see it.

If I attend an event like this, I go mainly for the networking to meet people face to face I want to do business with. You don’t generally get that opportunity anywhere else. I can always learn from videos and courses when I get home (it’s almost the same as sitting in the crowd with 1,000 people at an event).

So I’ll spend as much time as possible speaking with people, building rapport as I can and then when the recording are out, watch them on flights or in my spare time to level up. Like I said earlier, I’ll usually try to hit up 3-5 sessions which seem really awesome, then I can catch the rest of them when I have time.

It’s so easy to overload yourself with content at events, and this is just one way I limit that so I can get the most bang for my buck when attending.

The event was extremely well organised and very professional.

From the booths to the speaking areas, there were staff members situated all around the conference which I could ask for help or directions if needed.

I think a lot of people underestimate how much goes into planning an event, so the fine details at Content and Commerce Summit 2016 were handled very well.

I wasn’t a VIP at this event so can’t really comment on what it was like, but it seemed to be quite similar to the T&C VIP experience.

What Could Be Improved For Next Year?

For the first event of its kind I think it was really solid.

Again, this suggestion I made for T&C as well, add some more Q&A time to the event!

I can’t stress enough how important it is to get questions answered by your audience. Even doing a whole 1 hour session with the entire Native Commerce team on stage would be awesome where people could come up to the mix ask a question, get a 2 minute answer and then onto the next person.

I think that would really be valuable for next year’s event.

There really wasn’t too much I could fault when it came to the setup of the event logistics and preparation, all the speakers seemed to be prepared and had a good presentation (aside from that 1 flop I left early from).

As always, I’d recommend just mixing up the speakers and getting people in who could do more breakdowns of their content and commerce funnels (I think that’s where people get the most value from E.g. The way Ezra did in his session).

Would I Attend Again?

Yeah I probably would, mainly for the networking opportunities.

The fact that it’s also held towards the end of the year, is good because it means I’m not seeing people I saw 1 month ago at a similar event.

As much as I hate the 25 hours of flying to get there, it’s something you need to do if you want to remain up to date and in the loop within the industry.

The investment for me is about $5k overall in flights, accommodation, food etc. plus the time that’s spent away from my business which is more than that.

At this stage, I can safely say that I will net a far larger ROI than that by attending this event. The question is, will you return a bigger ROI by investing your time and money by attending too?

Would I Do Anything Differently As An Attendee Next Time?

I’d probably spend more time in the booths and only attend 1-3 sessions simply because I got that much value from the hallways and dinners after the event.

Another change I would make is to eat healthy and plan ahead with meals. I was caught off guard with the limited food at the hotel (as you’re stuck there over the 3 days) so I was scrambling for food, and when you eat unhealthy snacks all the time it takes its toll on your body.

Overall, it was a very successful event and I’ll be attending in 2017 🙂

Here’s some photos from the trip to give you an idea on what it was like to be there in the flesh. 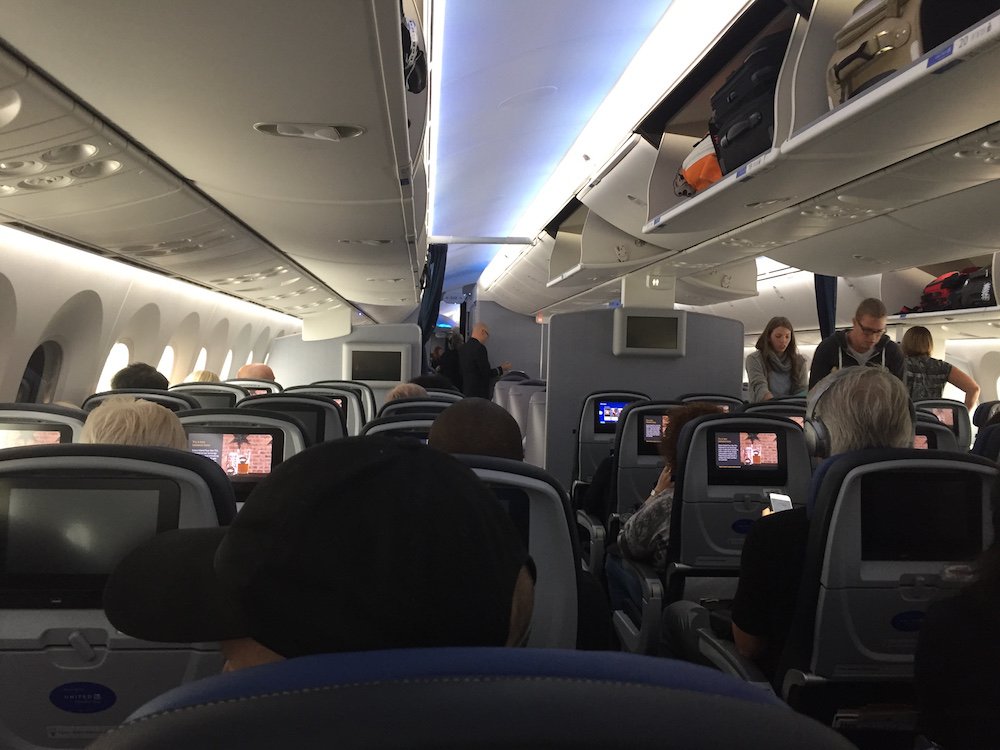 Flight from Melbourne to LAX 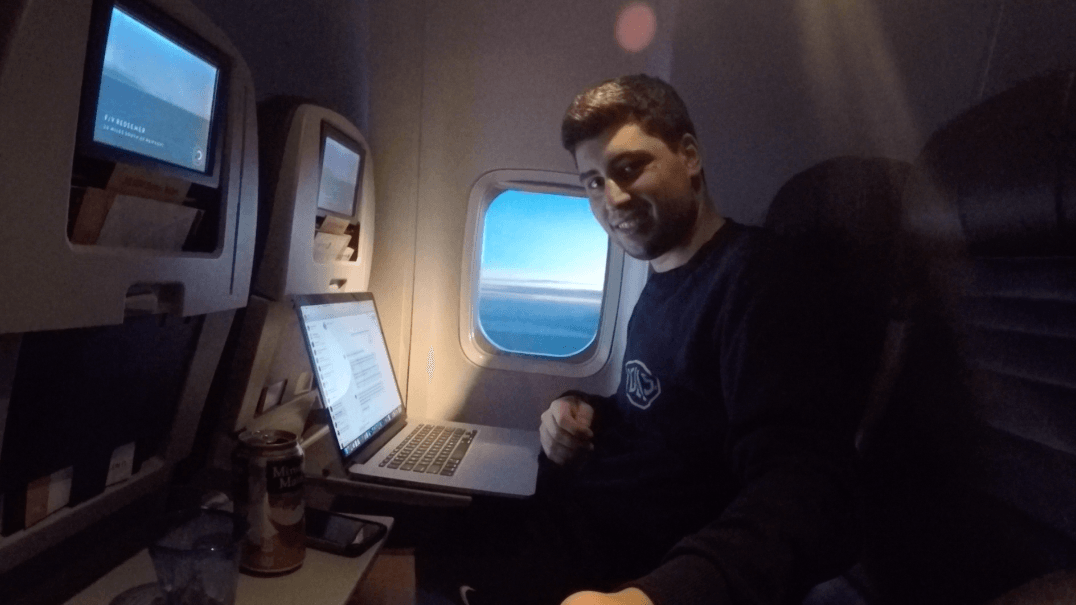 Pulled out my GoPro to take a selfie while flying across the USA. Had the whole row to myself! 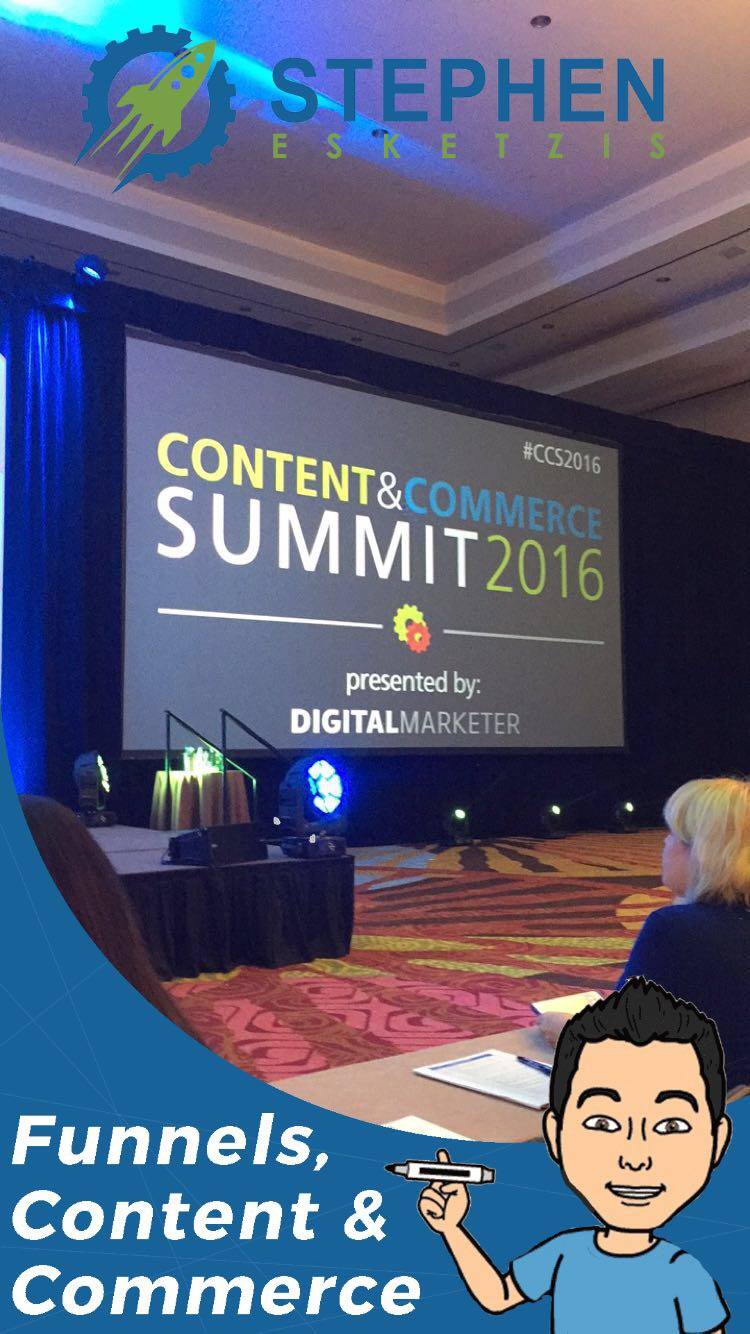 My custom Snapchat filter for the event! Came out pretty cool (only $150 for the day). Hanging out with the Design Pickle crew Perry Belcher talking about lack of heft (This was actually one of my favourite points of the event!) 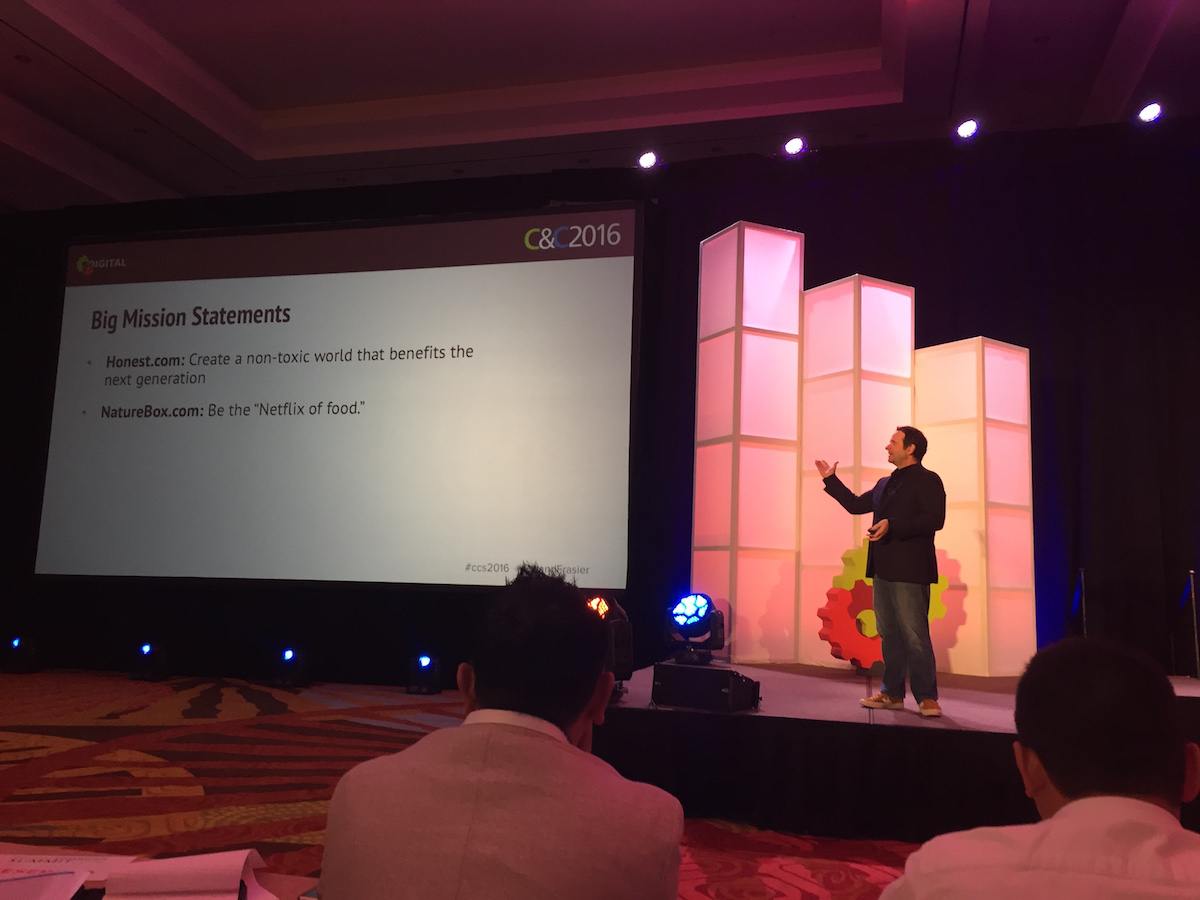 Roland Fraiser doing what he does best, reverse engineering the big brands! Got a snap with the one and only Ezra Firestone (He’s an eCom genius!) Watching Karen Kang’s presentation on outsourcing (systems and outsourcing is my bread and butter). Great session. Made some new friends over at OptiMonk! Zajdo & Niki Hung out with the Wholesale Distributor booth to find out more about their product range. Picked up some great retention strategies from The Newsletter Pro team Swung past the Press Cable table just before they packed up too. 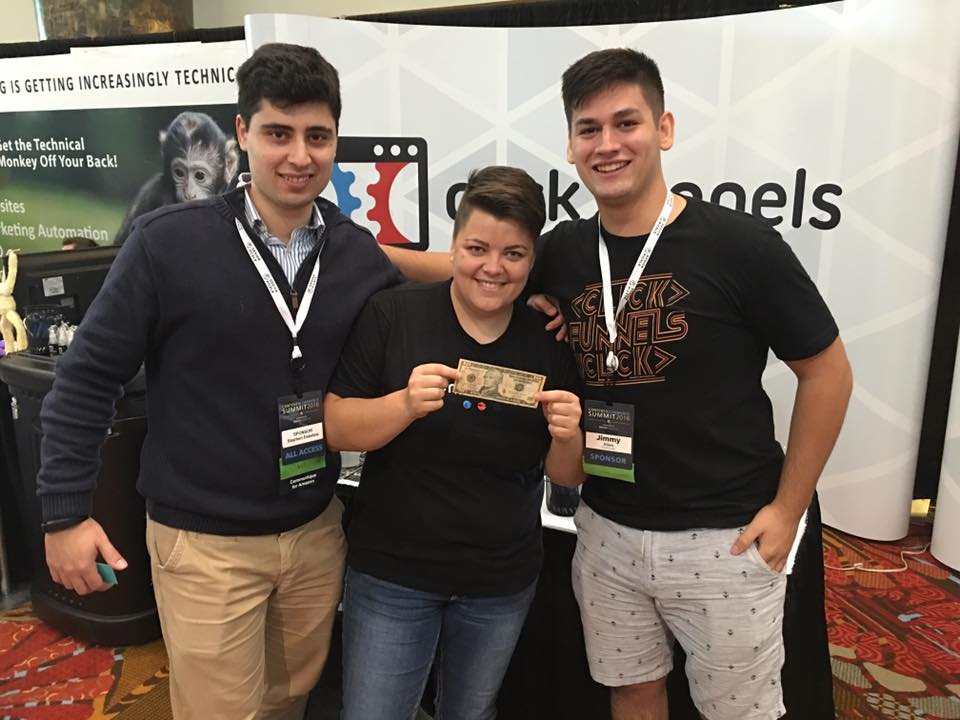 Epic Business And Lifestyle Review For 2016 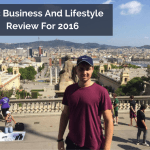 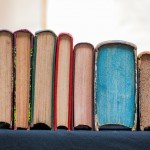 I’m Listening To 100 Audiobooks In 365 Days, Follow Along With Me

Someone from Edinburgh built a funnel 36 minutes ago.

Someone from Venice built a funnel 27 minutes ago.

Someone from Perth built a funnel 55 minutes ago.

Someone from Liverpool built a funnel 13 minutes ago.

Someone from Glasgow built a funnel 49 minutes ago.

Someone from Wellington built a funnel 9 minutes ago.

Someone from Denver built a funnel 30 minutes ago.

Someone from Dallas built a funnel 28 minutes ago.

Someone from San Diego built a funnel 26 minutes ago.

Someone from Bristol built a funnel 42 minutes ago.

Someone from Glasgow built a funnel 3 hours ago.

Someone from Venice built a funnel 8 hours ago.

Someone from Glasgow built a funnel 4 hours ago.

Someone from Jackson built a funnel 5 hours ago.

Someone from Dallas built a funnel 1 hours ago.

Someone from Manchester built a funnel 5 hours ago.

Someone from San Antonio built a funnel 2 hours ago.

Someone from Bolton built a funnel 5 hours ago.

Someone from Wellington built a funnel 3 hours ago.

Someone from Budapest built a funnel 3 hours ago.